Have you ever been to the Hanging Gardens of Babylon, the Lighthouse of Alexandria or the Great Pyramid of Giza? No? How about Empire State Building or the CN Tower? These last two are considered by some to be one of the “7 Wonders of the Modern World”. In other words, “wonders of the world” are highly subjective. In the world of investing, dividends are often called the “8th Wonder of the World”. Less awe-inspiring than the Taj Mahal, their charms come from a slow and steady accumulation of wealth.

Many people wonder “When will I be rich?” A better question is “How will I become rich?” Often the answer is by conservative and balanced investing strategies that include an allocation to companies that pay dividends—and raise them regularly. “There are advantages to investing in the shares of eligible Canadian companies,” says Larry Berman, chief investment officer of ETF Capital Management and the manager of the top-rated BMO Tactical Dividend ETF Fund. “When you buy these shares for your unregistered accounts, you receive a dividend tax credit which increases your return on them.”

Like brown corduroy suits and bell-bottom pants, dividends fell out of fashion in favour of high-growth, technology-oriented stocks. But while the corduroy suit may not be coming back anytime soon, extra low bond yields have driven investors to take a second look at the “Steady Eddies” of the equity world.

Of trends and dividends

“Typically, companies that pay out high dividends are mature companies with little debt,” says Berman. These companies, (think Coca-Cola, McDonalds, Proctor & Gamble) are often viewed as slow or no-growth firms. Some analysts attribute the renewed interest in dividend-paying companies as a reversion to the mean of the 1950s and 60s when more companies paid up and the average dividend yield was higher than it is today. When even a high-tech darling like Apple shells out over $32 billion on dividend payments it tells you that dividends are trending.

A number of studies have shown that dividend-paying companies perform better over time and with less volatility than those that do not pay. In one analysis of companies in the S&P 500 over a ten-year period ending 2010, those with the highest growth in yield produced a total return of 177 per cent compared to 56 per cent for companies with the lowest dividend growth. This outcome is not too surprising because to keep raising the payout a company must be generating free cash flow.

The total return of a portfolio comes from three sources: changing valuations, dividend income, and growth in dividends. Long-term investors benefit from dividend-paying companies in several ways. First, there is the regular payout that can be spent, or reinvested for compound return. Second, there is generally less volatility than with non-paying companies that allows the investor to sleep at night. And, lastly, the increasing popularity of dividend stocks has driven up demand and raised their valuations. Thus investing in dividend stocks checks all three boxes.

As Warren Buffett has often said, investors should think of themselves as silent partners in an ongoing business, as opposed to traders looking to make a quick fortune. But even someone as talented as Buffett has under-performed during extended periods.

So, a caveat is in order. There is no one perfect wealth-building strategy. Chasing yield without considering other factors can be dangerous— as recent history has shown with firms in the troubled oil and gas sector trimming or eliminating their fat payouts. “When you’re overpaying for a stock by 20-30 per cent things are going to end badly when the yield goes up on less risky investments like bonds,” says Berman. Finding an investment strategy that suits your risk tolerance and investment goals is key.

But like brown corduroy, when dividend paying companies are looked at in the right context, they weave their own special magic. 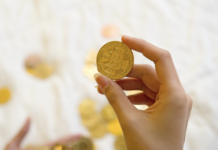 Are we moving to a cashless society? Crypto 101

Investing On Your Own