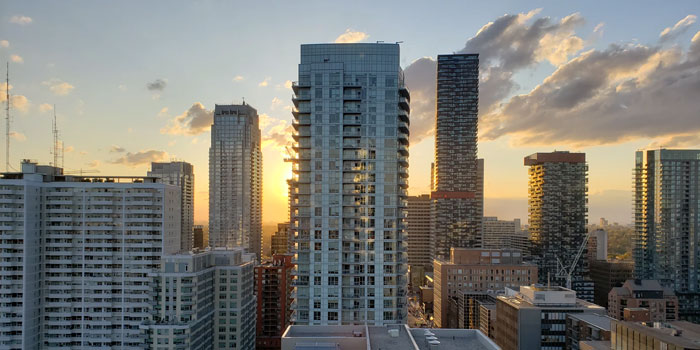 Like most major cities in Canada, Greater Toronto is struggling to keep and attract young professionals and families into the downtown core. One key solution is to focus on multi-use developments. It’s not a new idea, but it’s an idea whose time has come.

The GTA’s housing market has been extremely beneficial for those who already own property but the rise in prices means it’s increasingly difficult for first-time buyers. Some reports show that only the top 10 per cent of income earners in the GTA can afford the benchmark price of a Toronto home.

Potential buyers are finding alternative solutions. Some are looking further away from the downtown core; others are opting to rent their city residence, while purchasing a more reasonably priced vacation property; while others are buying with friends, family or choosing smaller footprint homes, such as family-sized townhomes and condos.

As a result, city planners and developers are examining ways to build housing that is both accessible and affordable — and there have been signs of success.

CBC recently reported the addition of 330,000 new immigrants to Toronto in 2019, with another 340,000 anticipated in 2020. Combined with a workforce comprised of Gen X and millennials looking to set down roots this leads most analysts to anticipate further price growth in the GTA.

The pace of growth draws builders and developers to find ways to not only construct single-family homes, but to find also densify existing residential areas and to build rentals.

According to Canadian Property Management, which is part of the REMI Network, a leading news and information source servicing the real estate management industry, the future growth of the GTA will concentrate on four main hubs:

This is where builders are concentrating their infill and redevelopment efforts. These areas are already close to transportation and amenities — two key components to creating a sustainable and vibrant community.

Developers are also creating more practical and adaptable spaces for buyers who want to live within the city limits but can’t afford single-family detached home prices. The result is a shift towards building larger rental units and condominiums, where a single-family can comfortably live.

Initially, the solution was to build high-rise towers. Yet, these towers didn’t always hold value — both in the market, and as a community. Quite often, these concrete and glass towers would lead to gutted communities — perhaps the most notable example of this was in Vancouver’s Coal Harbour neighbourhood. Hollowed-out communities — vertical or otherwise — are the antithesis of vital cities. The ideal solution, at least for community building, is to create space where rentals, residential and commercial co-exist.

In an urban-setting, this means building towers that are not limited to a single-use. It sounds simple, but it isn’t easy, as Asaf Gottesman, a principle of the Paris-based architectural practice Gottesman-Szmelcman Architecture SARL, explains. While mixed-use developments are an excellent way to revitalize destitute or under-used areas, these developments are a hard sell. As Gottesman says, developers, builders, architects and even financial backers often specialize in one or two types of projects. Mixed-use developments that incorporate three or more uses make it hard for all parties to accurately evaluate the project —and attract funding, get permits and secure trades.

Mississauga is a great example of the benefit of vertical density and the power of multi-use projects. A few decades ago, this city was virtually flat. Today, there are high-rise apartment buildings, both as condos and as rentals. Many of these towers also include retail. Mississauga isn’t the only southwestern Ontario city to increase its density by building up. Brampton, Hamilton, Guelph, Kitchener, and Waterloo have all also seen an increase in vertical densities — subsequently, a rise in municipal earnings (measured through GDP) and a rise in overall property prices has also occurred for these cities.

One key example of how vertical densification can work is in the soon-to-be-completed Montreal project known as HUMANITI. The h-shaped building began construction in 2017. The aim was to construct a ‘complete community’ by developing a complex that housed an office, condo, hotel as well as a multi-family residential development. The total build cost was estimated at $200 million and is set for completion this year. Designed to be a complete “city” within a city, with an emphasis on communal living, this all-inclusive type of development fits nicely with the city’s bold, new 15-year strategic plan to attract more young people, seniors and families to the downtown core. According to city documents, the overall strategy for achieving this goal is to rejuvenate the city’s core with more mixed-use developments, public spaces and parks, and to build to suit the needs of the population.

Across the country there are similar plans to create more complete communities using multi-use strategies. For example, University of British Columbia (UBC) planners created Ponderosa Commons, a 604,500-square-foot space that combines academic, commercial, recreational and even residential space on the Vancouver campus.

How ‘The Six’ Leads the Pack

In Toronto, Union Park is a $3.5-billion project that is slated to offer residential, office and retail in a complex that will cover 4.3-million-square-feet of space in the heart of downtown. The Daniels Waterfront project, a master-planned community on Queens Quay East includes two office towers, two residential and an outdoor atrium lined with boutique stores and restaurants. There is also the Camrost Felcorp project at the busy intersection of Burnamthorpe Drive and Hurontario Road in Mississauga. Spread out over three acres, this project combines 2,000 condo units with approximately 100,000-square-feet of retail and office space.

Going forward, city planners, developers and even home buyers will need to embrace creative solutions to a lack of space and a shortage of affordably priced housing.

Of course, community-building is only one factor when it comes to real estate. On the purely practical side, real estate is an asset that should appreciate, earn positive cash-flow income, or both. For homeowners and real estate investors, the move towards multi-use development will bring about positive changes.

For example, the addition of new office space will create competition with existing office space. This will allow tenants more choice and better leasing options, while incentivizing landlords to redevelop underperforming properties. Landlords could also experience an increased demand for space, resulting in higher rental rates and better valuations for these assets.

For homeowners, the better use of surrounding land through multi-use projects will result in higher land valuations, which helps to sustain or even increase current property prices.

In the end, developers and city planners need to consider how to right-size the use of all urban land. Even when higher volume isn’t necessarily appealing, a change in what is built and how productive a space can be — through multiple, complementary uses — will go a long way in creating well-rounded urban centres.