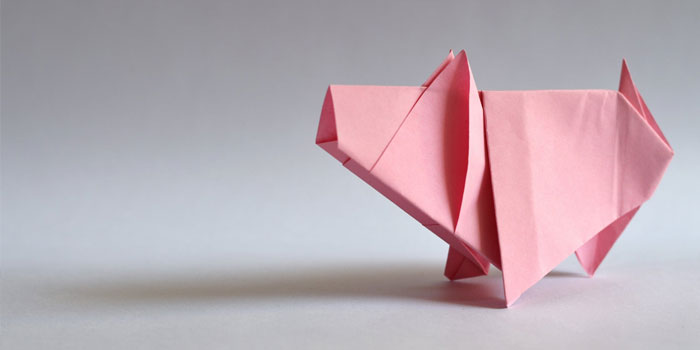 The Chinese New Year started on February 5th, marking the official Year of the Pig. After the economic zaniness of the previous Year of the Dog, especially during December, what can we expect from this farm animal? Bottom line: Pigs are positive for financial matters.

Every year, David Rosenberg, chief economist at GluskinSheff+ Associates presents his prognostications for the year ahead. This year, his talk at Rotman School of Management in Toronto was aptly titled: The Year of the Pig (Lipstick Won’t Help). Here are some highlights:

As investors, it’s easy to get wrapped up in short-term events and miss out on the bigger picture. Yet, simply looking at the performance of the S&P 500 over the past two years shows us that something is afoot.

In 2017, (Year of the Rooster), the S&P 500 returned +19.4%. A very robust number courtesy of the “Old Paradigm”, according to Rosenberg. Last year (Year of the Dog), was much less kind to investors, especially near the end with a total return on the S&P 500 of -6.2%.  This could be a harbinger of the New Paradigm: lower returns, more volatility.

However, here’s where things get interesting. When we examine the average nominal growth in GDP from 1949-2018, it’s 7.1 (before inflation) vs. only 3.8 during the current bull market. That’s a big gap in economic output. Does this mean that investors are willing to pay more to get less? Food for thought.

There are a number of factors contributing to slower growth. Sanctions and tariffs are usually a lose-lose proposition because they pinch profits. Corporate balance sheets are not in great shape. Any meaningful uptick in interest rates will increase the probability of loan defaults. More than half of corporate debt is rated BBB, the last tranche of investment grade before junk status. Most companies will do whatever they can to avoid falling into junk status because this results in a higher cost of capital for them. Investors will want a better return for taking on riskier debt. One way that companies stay out of the dog house is by spending less to shore up their wobbly balance sheets. Lower spending leads to slower growth, less hiring, and lower returns.

Okay, So What Are the New Rules?

We’ve had a long bull market and most analysts agree that we’re in the last innings. The bull market can certainly continue for several more years—or end tomorrow. No one really knows. However, this is good time to recession-proof your investments.

Just like every bull market is different, so is every recession. Judging by the last recession, here is the median return of several assets who performed admirably, from 6 months prior to the recession up to 3 months after:

If the old rules were “risk-on”, the new ones are “risk-off”. According to Rosenberg, “boring is the new sexy”. Consider investing in stable companies with clean balance sheets, and where your long-term return will come mostly from dividends. Einstein considered compounding the “eighth wonder of the world”. (Just as an example, during the last financial crisis from 2007-2009, Wal-Mart returned 7% while the S&P 500 tanked -57%.)